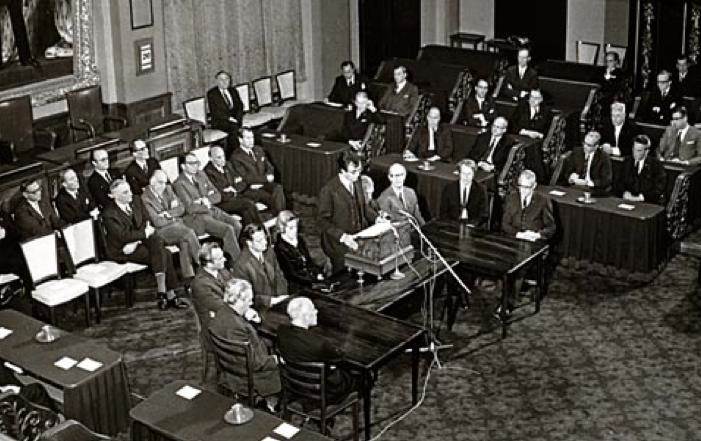 Installation of the prelimanary scientific council for government policy on November 20th 1972 in the council chamber of the Senate.

The WRR is tasked with identifying and advising on future trends and developments. In particular the council seeks to bring 'hidden' problems 'above water'. The first council took a predominantly theoretical approach based on international scientific literature, supported by the emerging disciplines of political science and public administration. In order to be able to provide scientifically based advice, it is clearly important to have close ties with the academic world. It quickly became apparent that the council also explicitly wished to be in communication with civil society organisations and the research offices of political parties. The practice of communicating by means of 'reports to the government' arose in 1975, as a means of distinguishing this form of output from other types of WRR publications, namely the 'preliminary studies' and 'background studies'.

In around 1974, the question arose of wether the WRR should carry out future research. This was regarded as a task for the council and as something that was needed by the government and society. However, the Cabinet could do little with future scenarios unless these were accompanied by recommendations. Henceforth, reports were therefore never published without accompanying policy recommendations.

Following the first external evaluation of the WRR, carries out by the Rinnooy Kan Commission in 2001 ('Spiegel naar de toekomst'), the council raised its public profile. The composition of the council was also made more flexible, with Dutch and foreign experts being brought in and verbal presentations of reports to various stakeholders.

From around 2003 onwards, more current and normative themes were placed on the WRR agenda, including topics such as the relationship between religion, state and society, media in the digital era and changes in the social communication structure, as well as the dynamic of Islamic activism.

The WRR has published approximately 88 reports in the 40 years of its existence, plus 170 preliminary studies and investigations  and more than 250 working documents, including the present webpublications. A number of reports have been widely disseminated internationally, especially  those concerned with agriculture, development cooperation and foreign policy.