WRR-Policy Brief 7 From disparity to potential: a realistic perspective on socio-economic health inequalities 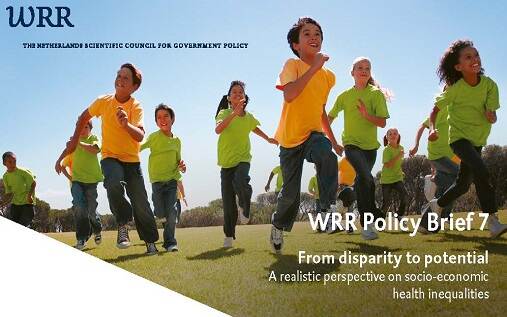 For decades, the main aim of such policy has been to reduce health inequalities between groups of higher and lower socio-economic status. Now, several decades later, we can conclude that the Dutch have become healthier as the result of policy efforts. We are living longer, and the number of years we feel healthy is increasing. Health inequalities between socio-economic groups have hardly declined at all, however, and they have even widened in some respects.

The WRR proposes to reinvigorate health-prevention policy by re-directing our attention from health inequalities towards health potential. From this perspective, we must consider where the greatest possible health gains lie, and how to keep health losses to a minimum.
Three priorities have emerged:

We also advocate exploring mental health as a new and urgent priority. Mood and anxiety disorders  are correlated with high disease burden, are more common within low socio-economic population segments and are becoming increasingly common amongst young people. Finally, we call for much-needed investments in research and monitoring. We know too little about the effects of policy and interventions with regard to reaching the available health potential in general, let alone differentiated according to vulnerable groups in society.