The creation of new money is an important, if largely invisible process in our economy and society. Contrary to what most people think, new money is created by commercial banks.  Banks create money whenever a loan is granted. Although this process of money creation has existed for a long time, the context in which it takes place has slowly but notably changed over the past decades. There has been a significant shift from cash to deposit money. Public payment and savings facilities have all but disappeared. The Dutch banking sector became much more concentrated and homogenous. This means that the traditional constraints on money and credit creation are weaker than they used to be.

Money Creation - How does it work?

we all use it.

For example when we pay in a shop...

In many cases, this doesn't involve coins or banknotes.

Actually, over 90 percent of all money in the Netherlands
consists of bank deposits.

That means it doesn't exist in physical form,
only in a bank's records.

So when we talk about money creation...

we're not primarily referring to minting coins
or printing banknotes...

but to the creation of deposit money.

They create it when they grant loans.

Suppose you are buying a house
and you go to a bank to arrange a mortgage.

The bank doesn't have to raise the money elsewhere,
before it grants the loan.

The bank can simultaneously grant the loan...

To understand how this works,
let's have a look at a bank's balance sheet.

The balance sheet is where 'the magic'
of money creation takes place.

A bank's assets consist of the loans it grants.

Banks can use these to pay each other.

The assets are financed by means of liabilities.

The liabilities consist of the deposits
on our payment accounts.

We can use them to make direct payments
or withdraw them in cash.

Deposits are actually debts that the bank owes to us,
the account holders.

Other liabilities are the savings accounts.

for example to the central bank.

And equity, the money invested in the bank by its owners.

Let's go back to the mortgage.

You can use the loan from the bank to buy your house.

The mortgage loan is added to the assets.

This loan has to be repaid with interest.

On the liabilities side a deposit appears
on the borrower's account for the same amount as the loan.

That means the bank's balance sheet has increased.

So can banks create an unlimited amount of money?

The answer is no.

There are a number of factors that constrain money creation.

First of all, the behaviour of consumers
and businesses plays a role.

What the newly created money is used for also matters.

When somebody repays a loan,
the money supply decreases again.

For example, the loan may not be repaid.

Losses have to be absorbed by the bank's equity.

If the losses are too high, the bank may fail.

So the bank won't want to grant loans unlimitedly.

Consumers can transfer their deposits to other banks.

The bank then has to transfer central bank reserves
to the other bank.

That means a bank must have sufficient
central bank reserves...

and that also poses a risk for the bank.

These in turn affect demand for loans.

Money is created by banks when they grant loans.

They are vital to the process...

but the central bank, the government, consumers
and businesses also play an important role.

To learn more about money creation...

The WRR identifies two core problems in the financial and monetary system. First, the high level of private debt contributes to financial instability, longer recovery after a crisis and increased economic volatility. Second, there is an imbalance between public and private interests in the banking sector, with a limited number of banks having become essential for key public services, such as the payment infrastructure, lending and financial stability.

The WRR recommends a more ambitious policy to remedy these problems in our current system. In particular, it recommends promoting greater diversity in the financial sector, curbing excessive growth of debt, being better prepared for the next crisis and safeguarding the public responsibilities of the banking sector.

The report ‘Money and Debt’ (Geld en Schuld) was presented on January 17th, 2019 to the Dutch government. This report is the result of a formal request by the Dutch Minister of Finance for an advise on the functioning of the monetary system, as suggested in a motion adopted by the Dutch Parliament during a debate on money creation. This debate was the result of the citizen initiative ‘Our Money’ (‘Ons Geld’). The English version of the full report will soon be available. An English summary of our report is already available

New release: Money and Debt: The Public Role of Banks

The Netherlands Scientific Council for Government Policy (WRR) and the international publisher Springer have published: Money and ... 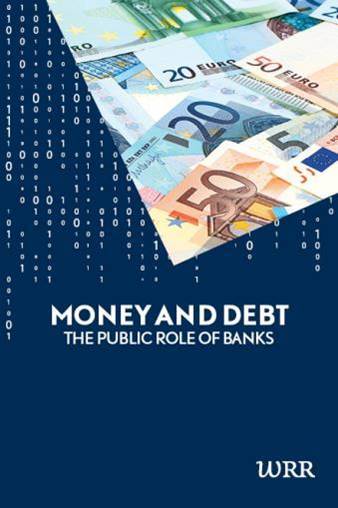