European Variations as a Key to Cooperation

European Variations as a Key to Cooperation, published by Springer and the WRR (ebook freely available here), focuses on the way in which the Member States can continue cooperating in a productive and constructive manner and the degree to which they should or should not strive to achieve uniformity in that cooperation. 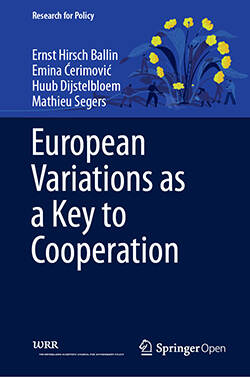 Fundamental question of uniformity and diversity

By accepting variation, the Union can avoid wasting energy on attaining a level of uniformity that is not really necessary. Variation makes it possible to forge credible ties with the democracies of the Member States. It offers scope and flexibility to provide collectively for public safety and security, stability, prosperity and social protection. Accepting variation as a structuring principle reduces tensions and prevents major disparities lurking beneath a show of unity from undermining the credibility of the Union.

The book’s proposal for the Union’s development going forward emphasises variation more than has been the case thus far. Recognising and accepting variation means that differences in needs and in democratically supported convictions are taken seriously. Variation is not a sign of weakness; rather, it avoids wasting energy and political credit to attain a level of uniformity that is not really necessary. Variation can thus be a proactive means of revitalising the relationship between institutions and citizens, and between public tasks and needs.